We build schools that are free to the public and operated by the government. Because of our partnership, over 2,000 children have received an education they would otherwise unlikely have.

Framework raises funds that allows us to hire and purchase materials locally, and to partner with the villages to construct durable, suitable primary schools. 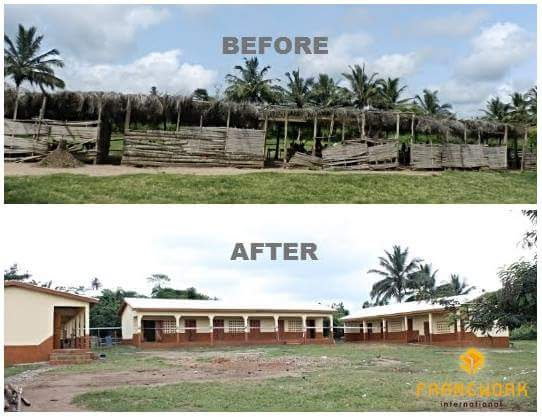 In Ghana, schools either belong to the government (public) or are owned by a group of private individuals (private). Government public schools are widespread throughout the country. As a result of their abundance, they receive little attention from the government, especially schools in the rural areas. Once the schools are constructed, the government generally does not provide funding for renovations or upkeep.

Many of these schools have been neglected for years without maintenance or renovation. Consequently, a large number of these schools have poor roofing as the metal sheets can be destroyed with extreme changes in weather, cracked walls that are easily collapsible, cracked and uneven floors, old desks, chalkboards and other school materials etc. All these provide an exceptionally unsafe environment for students and teachers. The rate of new school construction falls far behind the rapid population growth, leaving the area with a deficit of school facilities.

Framework collaborates with the local school districts who provide the teachers, curriculum and administration for the school. We are able to build, renovate and maintain schools at a fraction of the price it would cost the government by using local material and workers – stimulating the village’s economy, as its children are able to attend school.

Edukuma’s six-room primary school is crumbling. It was built in the early 90s, out of wood and tin, and is located in a valley between two hills. When it rains, all the rain ends up in the valley, flooding the school. Because of the rain damage over the years, the school is destroyed – wood rot, crumbling foundation and torn roof sheeting. A Framework-built school will help ensure that Edukuma’s children complete primary school and go on to junior high school and beyond! And the residents of Edukuma believe that having a new primary school will encourage its former residents to come back and make Edukuma their home again. The community sees school as a critical step in reshaping a hope-filled future! We will build Edukuma a six-room school that will accommodate up to 350 kids (pre-K through grade 6), with administration, storage rooms, and bathrooms.

Just outside of the suburban area of Ghana's capital city, Accra, along the West African highway is the small farming village of Small London. When we first visited this village in 2010, Small London’s nearest school was over two miles away, and only a portion of the 150 or so school-aged kids in the area were able to attend it, as the journey was difficult, especially during the rainy season when their one dirt road was washed out. Eight years after Small London opened their Framework-built elementary school, the children who started then are about to graduate from seventh grade. But this leads to another new challenge: there is no junior high in their village. These families are facing a tough decision: do they pack up and move, so their child can receive a junior high education, or do they stay put, and their child will only have an elementary one? The students at Small London are just as enthusiastic about learning today, as they were when we first met them, probably more so. This village is desperate for more classrooms, and the Small London teachers and village chief have asked us if we would consider building them two classrooms to serve their, soon-to-be, junior high students. We are so thankful that we could say “yes!” to them. We can make this “dream” come true for a village that values an education for their children, and for children, who are so enthusiastic to learn!

The Yakote Women Farmers, one of our strategic partners, told us of the great need this rural village had for a school. Their lower primary-aged students were using two crudely-built mud huts for their classrooms, and their upper primary students were studying “under the trees” outdoors. Soon, so much positive momentum started happening in this rural village. The Yakote Women Farmers dug wells for them to have fresh water and then the Ghanaian government decided to rebuild an abandoned primary school that will have bathrooms for their students, equipment storage, an administration room, and two classrooms. Because of this, we were able to change the footprint of our building from a three- room to a four-room classroom. For the first time in its history, Zeemboug will have a fully functioning six-room primary school! We were able to fully fund this school, in large part, due to the generous legacy gift from the Beu family in honor of their beloved husband, father, and grandfather, Jack Eugene Beu. Education was key to Jack. His entire career was in service to others – professionally, as an elementary school teacher and school principal; in retirement, as a person always looking for opportunities to connect with those in need. In honor of Jack’s service, and in recognition of this gift, the school was named in his honor: the Jack Beu Primary School of Zeemboug. 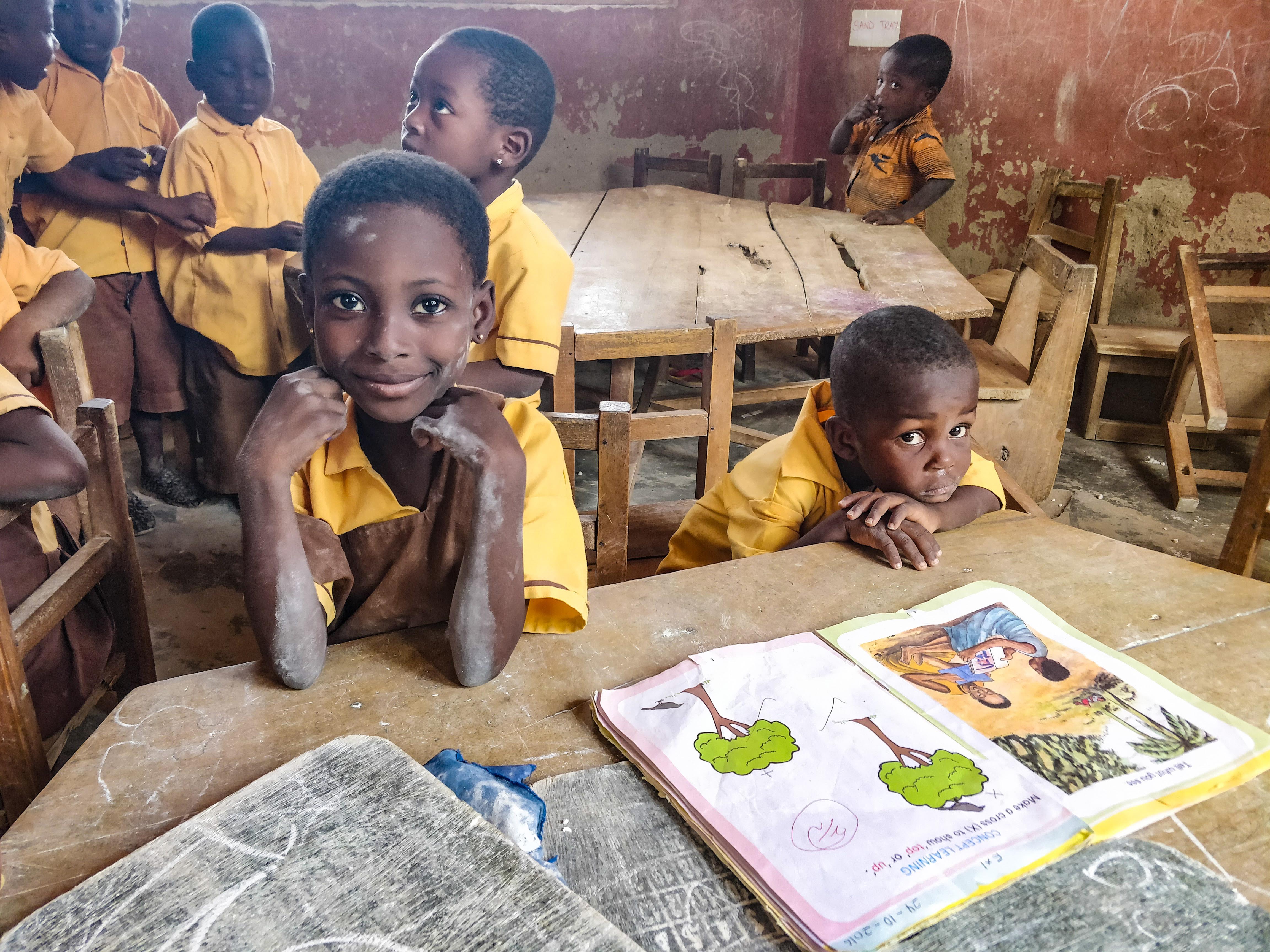 In the village of Kwaman, their primary school was old and dilapidated. During a storm, the roof collapsed. After the storm, the parents gathered enough of the old roofing sheets to make a makeshift cover for two of its six classrooms, but the situation was less than ideal, and the other classrooms remained unusable. The head teacher received a letter from the school district announcing their plans to condemn the school, and for the teachers to inventory all its supplies for redistribution. This is the only primary school in the village, and should be serving 350 students. All of the kids would have to go to schools in neighboring villages. But in reality, this means most of these kids would not go to school.

Piitanga Primary School is a six-classroom primary school in the village of Piitanga, in northern Ghana. It was our first school in this region, a region where two thirds of their population lives on 86 cents a day. It is hot, hard living, especially during their dry season when they get a total of one inch of rain over the span of six months. There was no public school in this village, and the children were severely hindered by the long distances they needed to walk, and the dangers of crossing streams to get to the closest school. On top of this, the area has a lot of poisonous snakes. In partnership with the Yakote Women Farmers and the Rotary Club of Lake Oswego, we were able to build a safe location for 150 children to get the framework of a basic education – which is their best chance of breaking out of poverty.

Kwansakrom is a community in Agona Swedru, a medium sized city in the central region of Ghana. The main occupation there is trading, farming, and building. The Kwansakrom primary school was first established in 1964. The school had six classrooms for 410 pupils. Due to over population in a class, a wooden structure that was meant to be a canteen was converted to an extra classroom. Because this area of Swedru has seen big population growth in recent years the school has become so overcrowded that they were forced to turn students away. We worked with BFG to build out an additional three classroom block to allow students who were turned away to return to their studies.

In 2016, during Framework’s annual in-person check-in, we visited with the school teachers and village chief to get an update on the community. To our delight, the school was proving to be a success and enrollment was way up, which had led to another issue: overcrowding. The school had become so successful they had run out of space for students. The community pleaded with us to build an additional three classrooms to accommodate the booming attendance and we were able to complete that project in early 2017. This expansion created a total of nine classrooms for Small London Primary.

Our third school project brought us together with our partner organization Building for the Future Generations (BFG). Akwakwah is a farming village located on the Bawjuase Nkwata road, roughly 35 minutes drive from Agona Swedru.

The existing structure was very dilapidated and substandard. The walls are breaking down and the roof was made of dried palm fronds. The school was in this state of disrepair for over seven years. According to the teachers there was no school at all when it rained. We replaced the old structure with nine new classrooms and the school now serves over 350 students.

Just outside the suburban area of the capital city, Accra, along the West African Highway we discovered a small unpaved road heading north towards a farming village called Small London.

The need for a school was immediately apparent. The closest school was over two miles away and only a portion of the 150 or so school-age population, in this and the surrounding two villages, were able to attend school. The distance was even more difficult to travel when the one dirt road was washed out during Ghana’s rainy seasons.

Each time we visited the village there were throngs of kids who were very excited at the prospect of being able to go to school. It was also clear that it is more difficult for girls of the village to be away from the home for a full day as parents are aware of the risks for young girls to be out of the home alone and they are expected to help take care of the domestic duties. Therefore, the new school was especially important and provides more opportunity for their education because they will be able to return home in short notice when needed and will not have to venture out of the community for an education.

Only a few days after beginning our hunt for a new project, we sat down with the chief and the elders of the Small London village to seal the deal on building a six-room school adjacent to the village which can educate 180 to 360 area children. We broke ground two days later and we completed the initial school project in 2012.

Our first project rebuilt a crumbling stick framed school into a durable six classroom cement structure. The school now provides a safe and sheltered environment for over 750 children from around the booming community of Amonfro, Ghana. Drawing on international funding and local talents, the project was successfully completed for a mere $20,000 USD. As an added bonus the construction of the Amonfro Primary School created over 50 jobs over the course of 24 months. The increase in the number of classrooms has also ensured space for 4 to 5 new educational positions. More importantly the provision of a stable structure and workable teaching conditions has decreased the turnover of the highly valued staff.